Meet Our Technicians and Assistants 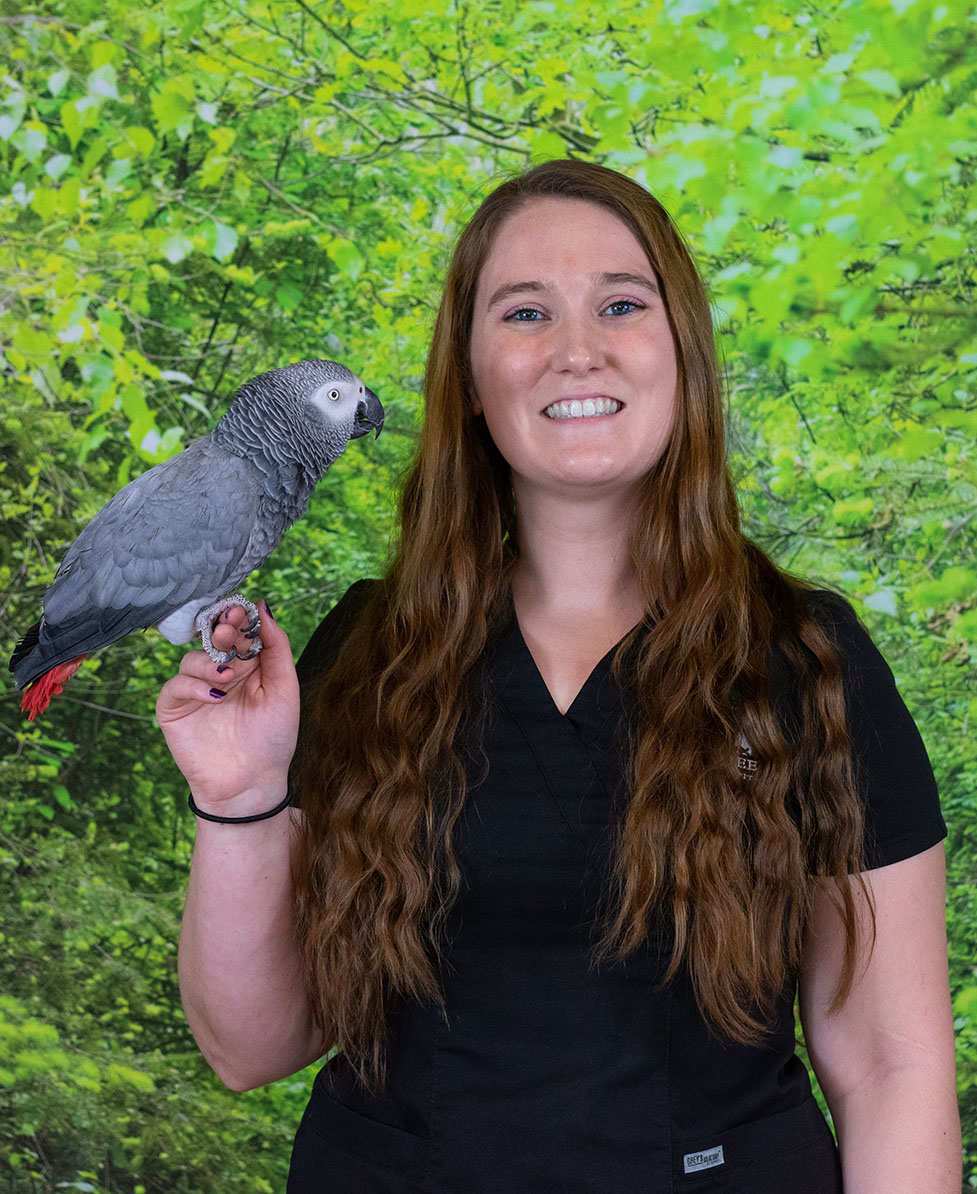 Chelsey Sutton has been around animals her whole life. She devotes a great deal of her time to taking care of all types of pet companions. She currently owns multiple snakes, geckos, an African grey parrot, a cat, and a wonderful dog. In 2019, Chelsey completed online courses with on-the-job training that qualified her to become a licensed veterinary technician in the states of Washington and California. Her goal is to become a Veterinary Technician Specialist (VTS) in clinical practice for exotic companion animals.

In her spare time, Chelsey loves to spend time with her friends, family and her animals. She gravitates toward being outdoors, especially if it involves camping, hiking, or white water rafting. 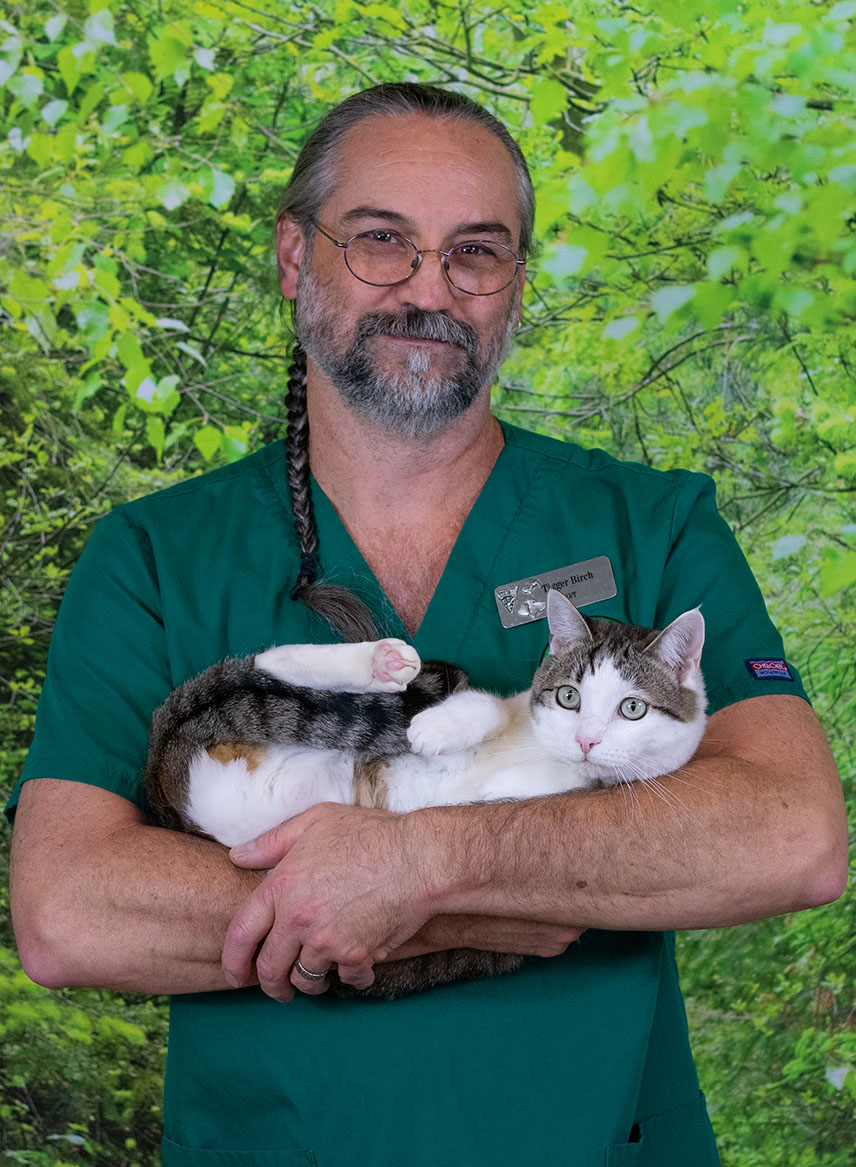 Tigger, as most people know him, was born Mathew Birch. A Seattle native, he started working professionally with animals in 2000. His passion for animals started as a child visiting his grandparents' farm on Whidbey Island. By his late teens and through his early 20's he was raising rabbits, chickens, ducks, geese, and goats, as well as owning ferrets, a California gopher snake, a painted turtle, a black Labrador and several cats. In spring of 1999 he started volunteering at P.A.W.S. Wildlife Center. He enjoyed wildlife rehabilitation so much that upon being hired the following spring he spent most of 6 years there. In 2005, after working with everything from hummingbirds to eagles and opossums to black bear, he started work as a Veterinary Assistant in a mixed practice hospital and continued to work with wildlife on the side. He received both a Veterinary Technicians License and WA Wildlife Rehabilitators Permit in 2010. In addition to working as an LVT, he helped to found South Sound Critter Care Wildlife Center in 2009. He is currently working with Featherhven Native Songbird Rehabilitation in Enumclaw, as well as consulting for For Heaven Sake Wildlife Center in Rochester.

In his off time he enjoys spending time with his wife, children and his current pets, which include Jake the dog, the cats Sassy Willow and Hermione, a sugar glider named Roo, Merlin the Green-Cheek Conure, and Elva, Fiona, and Skeeter the chickens (known collectively as "the girls"). 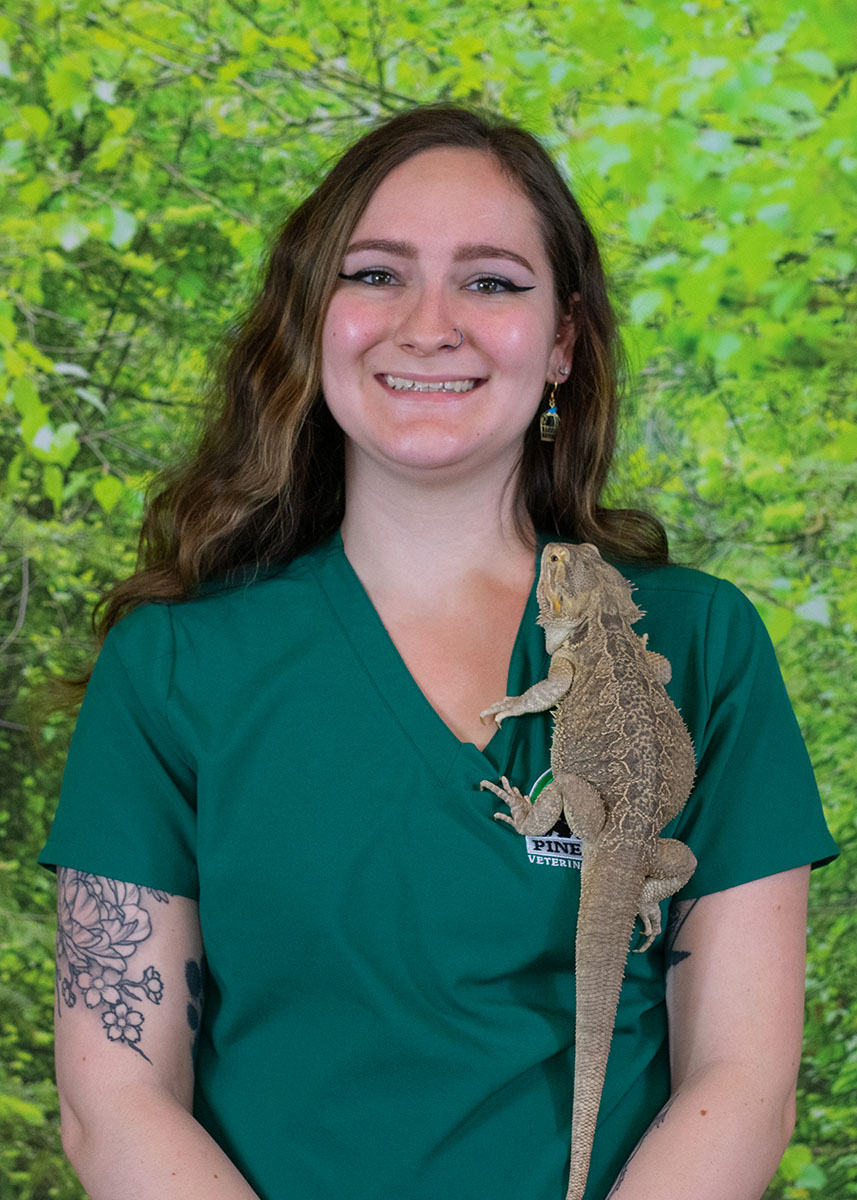 Cayle has always been around animals, and when she was little she decided that one day she was going to become a Veterinarian. She is well on her way to achieving that goal, having recently received her Veterinary Technician license from Pierce College. Through the course of her life she has cared for a small parade of dogs, cats, rabbits, frogs and fish. Currently Cayle has a pair of guinea pigs (Roscoe and Sebastian), a rabbit named Toph, 2 bearded dragons named Haku and Maverick, a ball python named Helios, a chocolate lab shepherd mix named Kassi, and 2 bengal cats named Bree and Autumn.

Cayle has always had a passion for riding horses and attended horse camps when she was younger. She has also volunteered for Critterqueen Rabbit Rescue, in addition to her constant pet sitting for friends. In her spare time Cayle likes to go on hikes, go camping, walk on the beach or do anything that involves getting outside with her boyfriend or family. She also enjoys photography and cars, so she is always up for going on long drives and discovering new places. Favorite animal: Cow 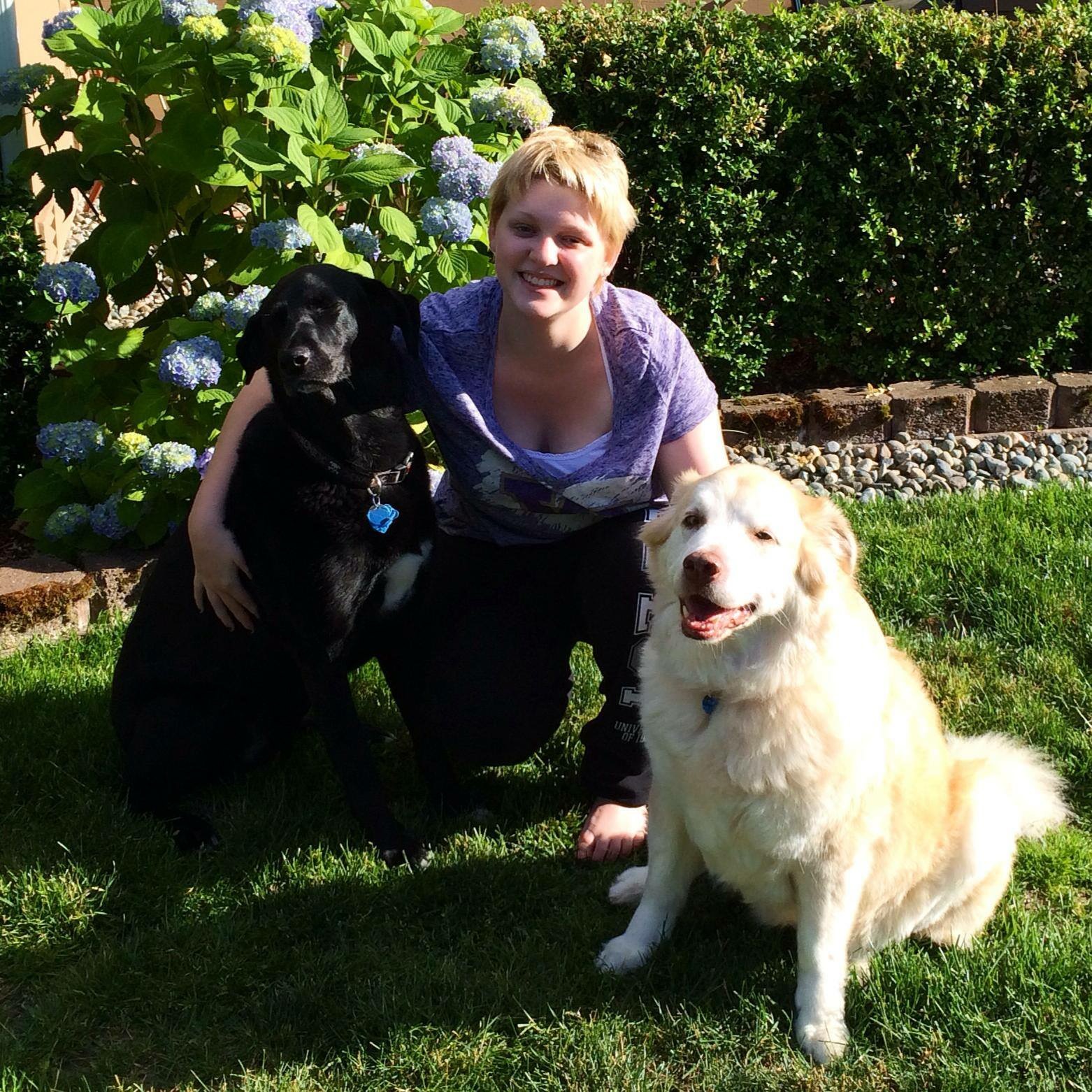 Sammie has always had a focus on helping animals. As a kid, her goal was to become a veterinarian and work with animals. Growing up she had dogs and cats and helped her uncle with his horses, mules and chickens. Currently, she has a border collie/lab puppy named Belle, three cats named Seymore, Lucy and Ruger and a pug named Todd Barkley. Sammie’s goal is to obtain her veterinary technician degree and help animals as much as possible. She has previously volunteered with the Auburn Valley Humane Society.

In her spare time, Sammie likes reading, cooking and baking, playing video games, walking her dogs or taking them to the dog park, drawing, and riding horses whenever she can. Courtney started life with a fish and a cat and, growing up, couldn't imagine life without animal friends. In Highschool Courtney expanded her ability to care for animals while volunteering at a wildlife rehab center. After graduating from Eastern Washington University with a Bachelor's of Science in Biology, with a focus in Biotechnology; she got a job as a Veterinary Assistant- a field she has come to love and one where she plans to stay.

When not studying for her Veterinary Technician license, she spends time with her pug pair or tends to one of her two aquariums. Courtney's hobbies are gardening, drawing, and playing video games or board games. One of her life goals is to keep chickens and goats one day. Kari grew up around a wide variety of animals. She loves helping out all animals as best she can. Currently she is attending Green River College studying math and science. One day she hopes to transfer into College of Engineering at the University of Washington. Kari's dream job would be to work at SpaceX helping get people into space.

To relax, Kari spends time playing video games on her computer, knitting, and reading books. While at home she also loves playing with her cat Ashes and feeding her plenty of treats. 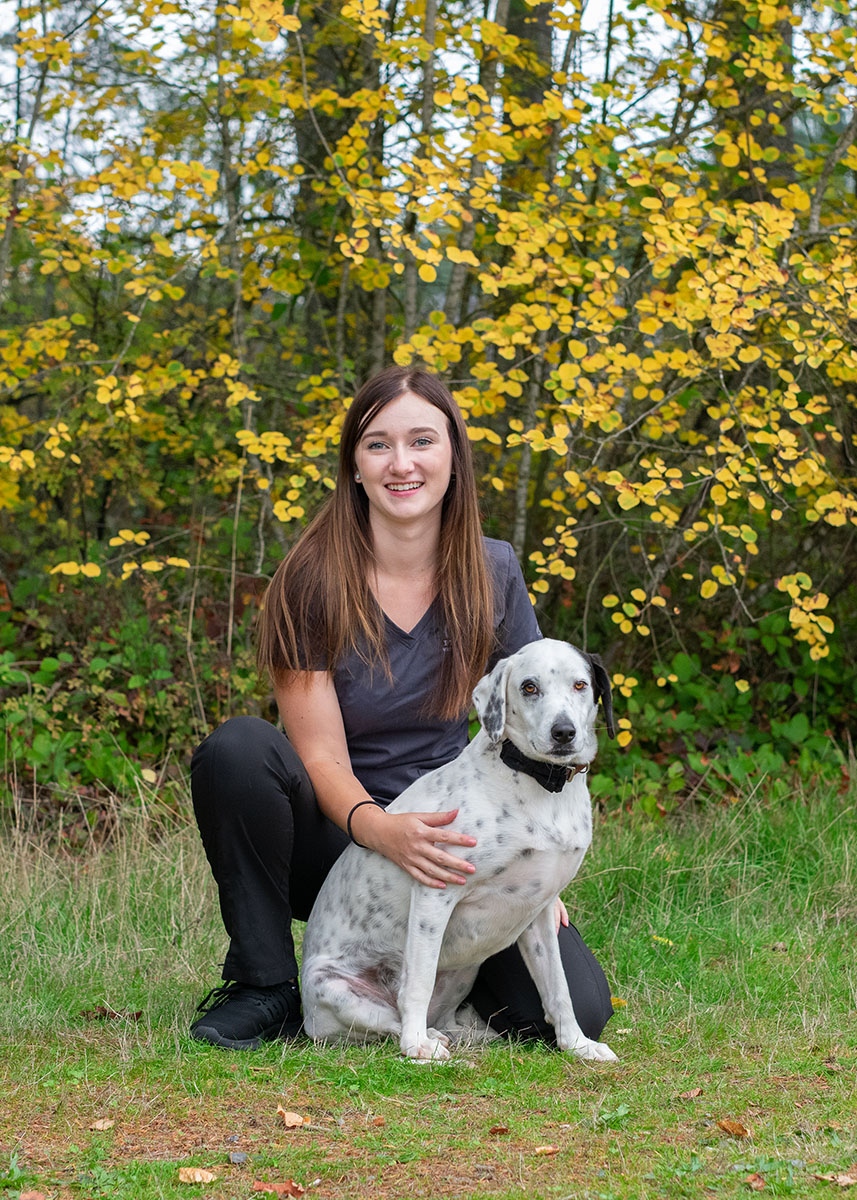 Malina was born and raised in Enumclaw, Washington. She grew up with a love for animals and learned to care for animals by helping her dad around their farm where he bred cows and kept other animals like goats, chickens, and pigs. She had many pets growing up including dogs, cats, rabbits, hamsters, guinea pigs, or during the summer time, the occasional turtle, frogs, caterpillars, salamanders, and garden snakes found in the forest and pond by her parent's house.

Since starting at Pine Tree she has fallen in love with veterinary medicine and is going back to school to gain her bachelor's degree. She spends all her free time either hiking with her dog Milo, reading, playing the piano, or hanging out with friends.

How To Reach Us